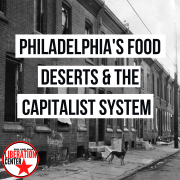 City residents shopping in Philadelphia’s food deserts face insurmountable and complex hurdles: proximity, affordability and quality. Food deserts, areas in which shoppers have limited access to healthy food, are created by the capitalist system when profit-motive compels private grocery store owners to center their businesses in high income areas, leaving residents in impoverished neighborhoods with little to no access to fresh, healthy foods. In Center City, where the median household income is 5 times higher than other areas of the city, less than 1% of residents live more than a half-mile away from a grocery store. In other neighborhoods that number can reach as high as 50%. In a city with over 1.5 million people, there are less than 150 grocery stores that offer a wide range of healthy foods — over 205,000 city residents do not live in close proximity to one of them. Kensington, Port Richmond, Fairhill, Overbrook, and Cobbs Creek, neighborhoods overwhelmingly composed of working class and immigrant residents, have the least access to healthy foods.

Before the COVID-19 crisis, over 327,000 Philadelphians suffered from food insecurity. Only about 24% of those in food insecure households were eligible to receive SNAP benefits — a clear indication of the capitalist state’s failure to address this problem. An October 2020 survey by Feeding America estimates that food insecurity has increased more than 40% in Southwest Pennsylvania since February 2020. But the poorest 40% of SNAP recipients, who were already receiving the maximum SNAP benefit, are receiving nothing extra to counteract pandemic-related hardships.

When grocery stores are out of reach, shoppers lean on neighborhood convenience stores and dollar stores for many of their food needs. 81% of food stores in Philadelphia carry little to no produce, instead offering more processed and high calorie convenience items. This disproportionate access to unhealthy food leads to dietary habits that cause increased health issues such as heart disease, high cholesterol, and diabetes. The average life expectancy can be as much as 20 years lower for residents of North Philadelphia compared to Center City.

With family budgets tighter than ever, and fresh, healthy foods further and further out of reach, many Philadelphians rely on assistance from community based efforts like the Unity and Survival (US) Program to meet their needs when government programs like SNAP fall short. Not only is the US Program able to supply households with fresh, healthy foods, but community volunteers deliver them to people’s homes, directly serving some of the most impoverished households of the city’s worst food deserts. Implementing a socialist program with a centrally planned economy could eliminate food deserts by focusing on the needs of the people over profit-motives in city planning. In the meantime, grassroots efforts like the US Program will remain vital to the survival of the people. You can support this important work by making a donation here. 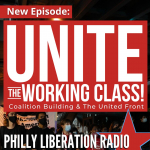